To pay respect for all our fallen comrades that were killed in the Vietnam War while serving beside us, we dedicate this section of our website “Lest We Forget” to honor and respect the service of all who served in Hotel 2/5, preserving the memory of those among us who died during the war. These men will always be remembered for their duty having died beside us while serving with Hotel Company, 2nd Battalion, 5th Marines Regiment, 1st Marine Division in connection with combat operations against the enemy in the Republic of Vietnam.

The Vietnam Veterans Memorial Wall stands as a symbol of America’s honor and recognition of the men and women who served and sacrificed their lives in the Vietnam War. 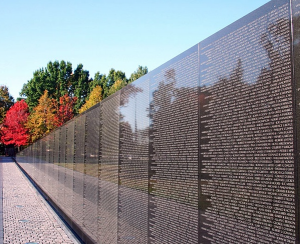 Inscribed on the black granite walls are the names of more than 58,250 men and women who gave their lives or remain missing.  The Memorial itself is dedicated to honor the “courage, sacrifice and devotion to duty and country” of all who answered the call to serve during the longest war in U.S. history.

Only the names of those who died in Hotel 2/5 during the Vietnam War are listed here for your review.  Each name listed can be clicked on to link you to “The Virtual Wall – Vietnam Veterans Memorial”.

The “Wall That Heals” is a traveling portable wall made 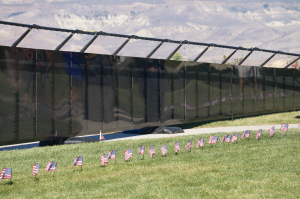 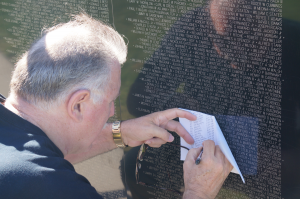 that travels from city to city throughout the U.S. on an annual rotational basis. This wall is a half-scale replica of the Vietnam Veterans Memorial Wall. We encourage you to visit the “Wall That Heals” when it visits a city near you or schedule a trip to the wall memorial in Washington, D.C.

“TOGETHER WE SERVED, TOGETHER FOREVER IN OUR THOUGHTS, TOGETHER WE HONOR YOU,  AND ARE RESPECTFULLY GRATEFUL” 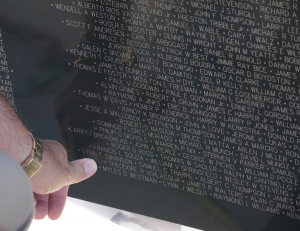 Silver Star  –  Awarded for actions during the Vietnam War

The President of the United States of America takes pride in presenting the Silver Star (Posthumously) to Second Lieutenant Theodore R. Vivilacqua, United States Marine Corps, for conspicuous gallantry and intrepidity in action while serving as a Platoon Commander with Company H, Second Battalion, Fifth Marines, FIRST Marine Division (Rein.), FMF, in connection with combat operations against the enemy in the Republic of Vietnam on May 11, 1969. On that date, during a search and destroy operation in Quang Nam Province, Second Lieutenant Vivilacqua’s platoon came under heavy fire from a North Vietnamese Army Force occupying well-concealed, mutually supporting bunkers.

Reacting instantly, Second Lieutenant Vivilacqua, ignoring the hostile rounds impacting around him, maneuvered his platoon against the bunkers and, despite the extreme heat and dense tree lines, successfully assaulted and destroyed the fortified positions. As the engagement continued, the platoon accounted for thirteen hostile soldiers killed and captured five AK-47 rifles, sustaining no friendly casualties.

Continuing his determined efforts, Second Lieutenant Vivilacqua, with complete disregard for his own safety, led his men against the hostile survivors. When his platoon’s ammunition began to run low, he aggressively pursued the retreating enemy soldiers, firing at them with captured hostile weapons. His bold initiative and heroic efforts inspired all who observed him and enabled the company to capture a fortified enemy village.

By his courage, aggressive leadership and steadfast devotion to duty, Second Lieutenant Vivilacqua upheld the highest traditions of the Marine Corps and of the United States Naval Service.