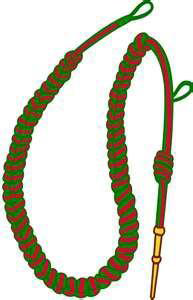 The French Government awarded decorations for especially meritorious conduct in action during World War I to 156 American units varying in size from a section to a brigade. These decorations were the Fourragere and the Croix de Guerre with various combinations of palms, gilt, silver, and bronze stars.

The unit twice decorated with the Croix de Guerre with Palms was entitled to a braided and knotted cord, called a Fourragere,  in  the  green  and  red  colors  of  the  Croix  de  Guerre.  The  Fourragere becomes part of the uniform of the unit so cited and all members of the organization are authorized to wear the decoration on the left shoulder of the uniform as long as they remain members of the organization.

According to Larousse’s Grand Dictionary of the XIX Century, the Fourragere was originated by the Duke of Alva, a Spanish general. After a unit of Flemish troops had made a rather hasty withdrawal from the battlefield, the Duke ordered “that any further misconduct, on the part of these troops,  should  be  punished  by  hanging,  without  regard  for  rank  or  grade”.  The Flemish warriors, determined to reestablish themselves in the good graces of their commander, wore — as a reminder of their disgrace — coiled around one shoulder, a rope in the shape of a hangman’s noose, at the end of which dangled a long spike. In their  next  battle  the  Flemings  fought  so  gallantly  and  well  the  noose  and  spike became a mark of distinction and honor.

The French Fourragere is a decoration instituted by Napoleon I for units which distinguished themselves in battle. It was revived during World War I and was awarded by the French Ministry of War to organizations which were cited more than once in the French Orders of the Army. The three classes of the Fourragere are as follows: First — Legion d’Honneur – Scarlet; Second — Medaille Militare – Yellow and Red; Third — Croix de Guerre (with palm) – Green and Red. In 1918, Marines of the Fifth and Sixth Regiments, by their heroic deeds of valor, inscribed the names of momentous and brilliant battles on the pages of Marine Corps history, as well as on their own regimental battle colors. They have the single honor of being the only two regiments in the American Expeditionary Force to receive three citations — two in the orders of the army and one in the orders of the corps — the Fourragere and the Croix de Guerre with two Palms and one Gilt Star.