THE COAT OF ARMS OF 2D BATTALION, 5TH MARINES 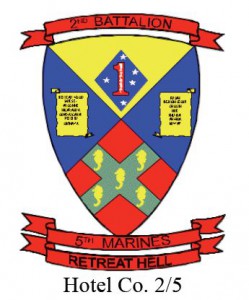 The Battalion coat-of-arms is a shield, point down, with scrolls above and below. The shield is divided diagonally into four wedges. Designed during the Vietnam War, the Battalion coat- of-arms reflects traditional heraldry, composed of references to past deeds and unit associations.
The uppermost wedge contains the emblem of the 1st Marine Division. The 5th Marines were incorporated into the Division in 1941, when the division was founded.

The 1st Marine Division assaulted Guadalcanal on August 7, 1942 in the first U.S. ground offensive in World War II. From this battle came the division emblem, a large read “1” inscribed with “GUADALCANAL” and the five stars of the Southern Cross on a field of blue. Though the Division emblem holds the senior position on the coat-of-arms, the Battalion and the Regiment both pre-date the Division by over twenty-five years.

The lower wedge contains the emblem of the 5th Marine Regiment, founded in 1914. The Regimental emblem consists of five seahorses, representing sea-going service, on a Scot’s cross. The colors are scarlet and gold, the traditional dress and display colors of the Marine Corps. The cross itself is hunter green, the color of the infantry and the color of the service uniform.

The left and right wedges contain scrolls inscribed with the major combat actions of the Battalion. “MEUSE-ARGONNE” and “MARNE” from World War I, “NICARAGUA” from 1927, “GUADALCANAL,” “PELELIU,” “NEW GUINEA” and “OKINAWA” from World War II, “INCHON,” “SEOUL,” “PUSAN” and “CHOSIN” from Korea, and “HUE,” “PHU-BAI,” ‘AN-HOA” and “QUE- SON” from Vietnam. Battalion combat actions since Vietnam have yet to be added to the Battalion Coat-of-Arms.

The scrolls above and below the shield read “2nd Battalion,” and “5th Marines.” In 1999, Headquarters Marine Corps approved a Battalion request to add a second scroll, reading, “Retreat Hell.” This commemorates the words of Captain Lloyd Williams, a company commander with the Battalion during its first combat action at Belleau Wood in 1918. When ordered by a French major to retreat, Captain Williams responded, “Retreat? Hell! We just got here!”