It is our intent to provide accurate information about the war in Vietnam as we combat veterans understood it. The public pages reflect information that we have gathered over the years. Should you wish to contribute information to this cause, please contact our webmaster.
In April 1966, 2nd Battalion, 5th Marines, 1st Marine Division located at Camp Pendleton, CA deployed to the Republic of Vietnam. During the next five years the battalion participated in combat operations in Hue city, Que Son, Phu Bai, Dong Ha,Phu Loc and ran combat operations out of their firebase at An Hoa. The battalion returned to Camp Pendleton in 1971, and in 1975 participated in Operation New Arrival, the relocation of Southeast Asian Refugees.

In the Beginning After World War II

The causes of the Vietnam War trace their roots back to the end of World War II. A French colony, 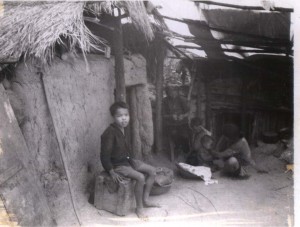 Indochina (Vietnam, Laos, & Cambodia) had been occupied by the Japanese during the war. In 1941, a Vietnamese nationalist movement, the Viet Minh, was formed by Ho Chi Minh to resist the occupiers. A communist, Ho Chi Minh waged a guerilla war against the Japanese with the support of the United States. Near the end of the war, the Japanese began to promote Vietnamese nationalism and ultimately granted the country nominal independence. Following the Japanese defeat, the French returned to take possession of their colony. Their entrance into Vietnam was only permitted by the Viet Minh after assurances had been given that the country would gain independence as part of the French Union. Discussions broke down between the two parties and in December 1946, the French shelled the city of Haiphong and forcibly reentered the capital, Hanoi. These actions began a conflict between the French and the Viet Minh known as the First Indochina War. Fought mainly in North Vietnam, this conflict ended when the French were decisively defeated at Dien Bien Phu in 1954. The war was ultimately settled by the Geneva Accords of 1954, which temporarily partitioned the country at the 17th parallel, with the Viet Minh in control of the north and a non-communist state to be formed in the south under Prime Minister Ngo Dinh Diem. This division was to last until 1956, when national elections would be held to decide the future of the nation.

The Politics of American Involvement

Initially, the United States had little interest in Vietnam and Southeast Asia, however as it became clear that the post-World War II world would be dominated by the US and its allies and the Soviet Union and theirs, isolating communist movements took an increased importance. These concerns were ultimately formed into the doctrine of containment and domino theory. First spelled out 1947, containment 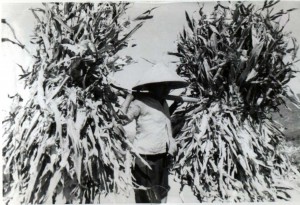 identified that the goal of Communism was to spread to capitalist states and that the only way to stop it was to “contain” it within its present borders. Springing from containment was the concept of domino theory which stated that if one state in a region were to fall to Communism, then the surrounding states would inevitably fall as well. These concepts were to dominate and guide US foreign policy for much of the Cold War. In 1950, to combat the spread of Communism, the United States began supplying the French military in Vietnam with advisors and funding its efforts against the “red” Viet Minh. These efforts continued in 1956, when advisors were provided to train the army of the new Republic of Vietnam (South Vietnam). Despite their best efforts, the quality of the Army of the Republic of Vietnam (ARVN) was to remain consistently poor throughout its existence.

A year after the Geneva Accords, Prime Minister Diem commenced a “Denounce the Communists” campaign in the south. Throughout the summer of 1955, communists and other oppositionists were jailed and executed. In addition to attacking the communists, Diem assaulted Buddhist sects and organized crime, which further alienated the largely Buddhist Vietnamese people and eroded his support. Later that year, Diem rigged a referendum on the future of the country and declared the formation of the Republic of Vietnam, with its capital at Saigon. Despite this, the US actively 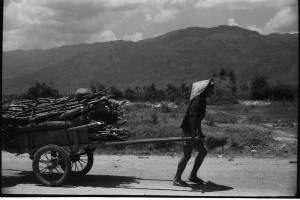 supported the Diem regime as a buttress against Ho Chi Minh’s communist forces in the north. In 1957, a low-level guerrilla movement began to emerge in the south, conducted by Viet Minh units that had not returned north after the accords. Two years later, these groups successfully pressured Ho’s government into issuing a secret resolution calling for an armed struggle in the south. Military supplies began to flow into the south along the Ho Chi Minh Trail and the following year the National Front for the Liberation of South Vietnam (Viet Cong) was formed to carry out the fight.

The situation in South Vietnam continued to deteriorate with corruption rife throughout the Diem government and the ARVN unable to effectively combat the Viet Cong. In 1961, the newly elected Kennedy Administration promised more aid and additional money, weapons, and supplies were sent with little effect. Discussions then began in Washington regarding the need to force a regime change in Saigon. This was accomplished on November 2, 1963, when the CIA aided a group of ARVN officers to overthrow Diem. To help deal with the post-coup chaos, Kennedy increased the number of US advisors in South Vietnam to 16,000.
The Vietnam War occurred in present-day Vietnam, Southeast Asia. It represented a successful attempt on the part of the Democratic Republic of Vietnam (North Vietnam, DRV) and the National Front for the Liberation of Vietnam (Viet Cong) to unite and impose a communist system over the entire nation. Opposing the DRV was the Republic of Vietnam (South Vietnam, RVN), backed by the United States. The war in Vietnam occurred during the Cold War, and is generally viewed as an indirect conflict between the United States and Soviet Union, with each nation and its allies supporting one side.
The Vietnam War first began in 1959, five years after the division of the country by the Geneva Accords. Vietnam had been split into two, with a communist government in the north under Ho Chi Minh and a democratic government in the south under Ngo Dinh Diem. Ho Chi Minh launched a guerilla campaign in South Vietnam, led by Viet Cong units, with the goal of uniting the country under communist rule. The United States, seeking to stop the spread of communism, trained the Army of the Republic of Vietnam 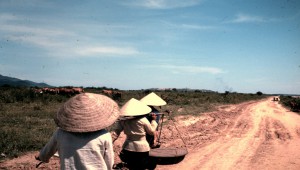 (ARVN) and provided military advisors to help combat the guerillas.

Campaigning under the slogan “Peace with Honor,” Richard M. Nixon won the 1968 presidential election. His plan called for the “Vietnamization” of the war which was defined as the systematic build up of ARVN forces to the point that they could prosecute the war without American support. As part of this plan, American troops would slowly be removed. Nixon complemented this approach with efforts to ease global tensions by reaching out diplomatically to the Soviet Union and People’s Republic of China. In Vietnam, the war shifted to smaller operations geared towards attacking North Vietnamese logistics.

Hotel Company, 2nd Batallion, 5th Marines, 1st Marine Division personnel were the first 5th Marines unit to permanently deploy  to Vietnam, arriving at Chu Lai on 12 April 1966 making their presence known. The purpose of this website is to pick up the history from this point to tell the story of the Vietnam War from Hotel Company combat veterans’ perspectives from April 1966 to 1971. We trust you will enjoy the history lesson and meet the men of Hotel Company as this website continues to build over the years.