Water We Drank by Doc Noah

I am sure every Vietnam Infantry Marine recalls the water in our canteens and where it came from during those long excursions in the countryside. In the rear, there were water buffalos. We would dip our canteens into a river or a creek and fill it up with the local water. Of course the water was muddy, full of little invisible critters, and probably full of all sorts of chemicals from the war. In addition, it had human and animal waste as well. How we drank that stuff is beyond me today. Actually, drank is almost a misnomer. We chewed it then gagged it down. It would give us the Ho Chi Minh trot and I blame the loss of my hair on my head on it. 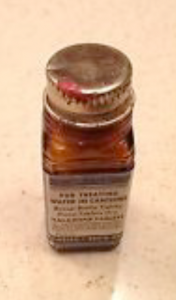 Well, the Corps had the wonderful solution. Halazone tablets concocted and stored somewhere in those little brown bottles since World War Two. We would add those tablets to the water and we drank that stuff. Mom would send me packets of Kool Aid. My canteen contained brown muddy water, halazone, and Kool Aid. What a combination. To this day I will not drink Kool Aid or flavored water.

One day while Hotel was guarding the coal mine at Nong Son. I had a brilliant idea. By the way, why did we guard that coal mine as they never mined a lump of coal. Also how was the NVA going to steal a coal mine? Never made sense to me. Back to my brilliant idea, chlorine. Brilliant right? Chlorine was used back in the states to purify the water for everyone to drink. Why could we not have some of our own?

I wrote on one of those dumb supply forms in triplicate “one box of powdered chlorine for medical purposes” and sent it onto to supply. I did not have it approved as I never had anything approved. It always seemed a waste of time and as a corpsman no one ever asked for approval.

A few days later I received a call that there was a “package” for me at the helicopter landing pad. So I trotted down that long hill and they pointed to a barrel sitting on the ground. This was my box. Well the Marine Corps in all its generosity had sent 50 pounds of highly concentrated chlorine. There was enough of it to treat the water supply for the city of St. Louis for a week. I envisioned a box about the size of a C Ration box. No they had sent me an entire barrel.

So with difficulty I picked it up and an hour later I had it to the top of the hill. I only weighed about 116 pounds. It weighed nearly half of my “skinny ass” (as Wadley would say) and it was difficult, requiring many stops to rest. My arms had burn marks on it from the residual of chlorine on the outside of the barrel.

I decided that I would ration it out to the Marines and not allow access to it. An overdose of the stuff would burn your insides. So every morning I would put a small pinch into the canteens of the guys until we left. That barrel is probably sitting there in the bunker and I would even hazard a guess the coal mine is still there too.