The MCI consisted of a rectangular cardboard carton containing 1 small flat can, 1 large can, and two small cans. It consisted of an “M”-unit can (meat-based entree item), a “B”-unit (bread item) composed of the Crackers & Candy Can and the flat Spread Can, and a “D”-unit can (dessert item). The M-1, M-3, B-1, B-2, D-2, and D-3 unit cans were small and the M-2, B-3, and D-1 unit cans were large. The ration cans were packed upright, with the flat Spread can over the large can on the left side and the two small cans were stacked one over the other on the right side (the lighter one over the heavier one). On top was the brown foil Accessory Pack and a plastic spoon wrapped in clear plastic. Each carton contained a single complete meal providing approximately 1,200 calories (1200 kcal or 5,000 kJ), with a packaged weight of 2.7 pounds (1.2 kg) and volume of 0.052 cubic feet (1.5 L). 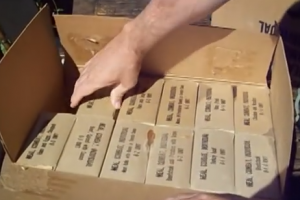 The label of the ration carton was printed across the lid of the rectangular box in three rows. The first row always read “MEAL, COMBAT, INDIVIDUAL”. The second row indicated the name of the meat unit in bold capital block letters (e.g., “TURKEY LOAF”) and the third row indicated the “B”-unit number (either B-1, B-2 or B-3 Unit) in bold capital block letters. Sometimes there was a smaller fourth line of type at the very bottom of the cover that either indicated the contractor who made the ration or the manufacturer that made the cardboard box itself.

The ration boxes were shipped in a rectangular cardboard packing case. Each packing case contained 12 ration cartons (containing one of each meal) packed in 2 rows of 6 rations. They were grouped in 3 menus of 4 meals each, organized by their “B”-unit (B-1, B-2, & B-3). It also contained 4 paper-wrapped P-38 can openers to open the cans. Each packing case weighed 25 to 26 pounds (11 to 12 kg) and had a volume of 0.8713 cubic feet (24.67 L). Early cases were bound with bailing wire, but late Vietnam War and post-war cases were bound in plastic strapping.

The “B” unit came in three different varieties:

Each menu was grouped by their unit number (i.e., M-1, B-1 and D-1 items were grouped together). As an example, the jam in the B-3 unit was meant to be spread on the White Bread in the D-3 unit. Alternate items (designated with an “A” suffix) were introduced to provide variety and reduce the monotony. For variety, the M-1 and M-3 units (since they both used small cans) were often switched.

The “B”-unit’s Crackers & Candy can was lined with a piece of corrugated cardboard to protect the contents from damage. In the “D”-unit, the white bread came in one solid cylindrical piece, while the pound cake, fruitcake, Orange Nut Roll, and Cinnamon Roll came wrapped in paper wrappers like cupcakes.

Typical commercial brands issued in the cigarette ration were: Camel, Chesterfield, Kent, Kool, Lucky Strike, Marlboro, Pall Mall, Salem, or Winston. Due to health concerns, cigarettes were eliminated from the accessory packs in 1975.

Though it had been given a new name, the MCI was in essence still the canned C ration of prior years. Selecting the MCI ration for all field issue resulted in limiting troops in the field to a single class of heavy wet packaged ration that despite meal variances was simply not suitable for extended consumption. As they had in World War II and Korea, soldiers and Marines regularly complained of the monotony of a single class of field ration, especially where field mess A and B rations were not available for extended periods of time.  Despite the inclusion of additional menu items, the MCI was still designed only for “infrequent use” (unlike later individual rations, which would be required to pass a new field test of seven consecutive days of consumption as the sole diet without complaints of monotony).

The overuse of the canned ration culminated during the Vietnam War, where American troops frequently resorted to the extreme of placing stacked ration cans in empty G.I. socks to save bulk and reduce noise on patrol, while enemy forces improved mobility by carrying lightweight rations of dry rice. Primarily implemented due to cost concerns, the decision to standardize on a single canned wet individual ration resulted in a severe weight penalty for troops marching on foot through the jungles of Vietnam while carrying a multi-day supply of MCI cans, adversely affecting combat readiness and increasing soldier fatigue (a typical complete individual ration of cans for one day weighed five and a half pounds).   Many combat soldiers and Marines, already overburdened, carried the minimum amount to save weight on operations until the next resupply drop; when the drop was delayed, they went hungry.