Voices of Courage: The Battle for Khe Sanh, Vietnam

From the Publisher Bulfinch Press

Voices of Courage: The Battle for Khe Sanh, Vietnam tells the story of one of the most heroic efforts in American mililtary history–a seventy-seven day struggle in early 1968 for the remote Khe Sanh Combat Base–during which six thousand perilously isolated Marines withstood the onslaught of a superior enemy force. 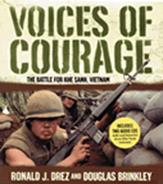 Drawing on a vast archive of recorded interviews and written material collected over the past twenty years by Ronald J. Drez and the Eisenhower Center for American Studies at the University of New Orleans, authors Drez and Douglas Brinkley provide a gripping narrative addressing every aspect of the battle, interwoven with testimonials from soldiers who fought at Khe Sanh.

Featuring two audio CDs that provide a unique opportunity for these valorous voices to be heard, Voices of Courage urges a long overdue recognition of the stunning fortitude displayed by Marines and other members of the U.S. Armed Forces at Khe Sanh, and promises to reshape the way we remember the Americans who fought for their nation in Vietnam.

From the Publisher MBI Publishing Company

Road of 10,000 Pains, which takes its name from The Iliad, is an epic oral history of Vietnam’s bloodiest campaign, fought for seven months in a series of battles, most within four miles of each other, along Route 534. 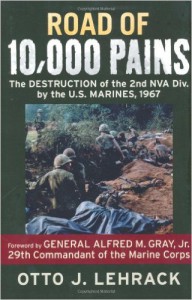 “Oh, yes,” a retired NVA officer matter-of-factly declared to former U.S. Marine Otto J. Lehrack. “In the Que Son Valley in 1967, we killed more Americans than at any time or place during the war.”

In October 1967, orders came down to the 2nd North Vietnamese Army Division commanding them to join with local Viet Cong units and seize the city of Da Nang in the coming Tet Offensive. When the time came, the division was so battered from its seven-month campaign in the Que Son Valley that it failed to carry out its mission. Only one platoon was to make it inside the city limits of Da Nang. Had it not been for the violent struggles in the valley, Da Nang may have suffered the same fate as the city of Hue.

“Road of 10,000 Pains is a very good book. And its author is not only a good writer, but a wise one who, having interviewed countless veterans of the fighting, provides the necessary narration that binds it together. His judiciously selected quotes make this account one of the best books about the Vietnam War to date.” —Leatherneck magazine